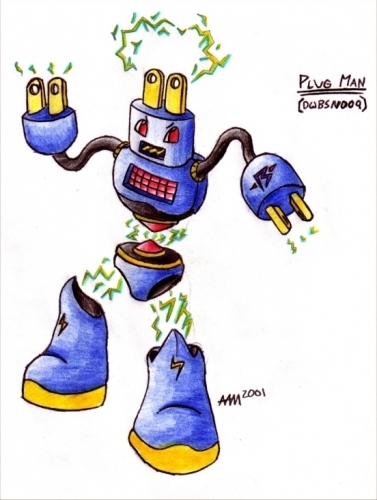 This piece of artwork is meant to be concept artwork for an original robot master designed by me many years ago while I was on vacation, living with my aunt, in Sault Ste. Marie, ON. This Plug Man character was one of my many early ideas for robot masters that would be featured in the [then] potential "MegaMan 9" video game.

Since then, "MegaMan 9" has become a reality as opposed to just a fantasy, being released by Capcom on Nintendo WiiWare, Playstation Network, and Xbox Live Arcade in late 2008. Coincidentally, the game features a robot master by the same name as my character - Plug Man. It's interesting (for me at least) to compare the two versions of the character and see how similar or different our ideas were. Sure there are similar design elements (like the plug, for example), but otherwise they're totally different characters. Pretty cool.

Due to the time period in which it was created I was still young an inexperienced, but I still think the piece turned out rather well and managed to capture whimsical feeling of Classic MegaMan robot masters.