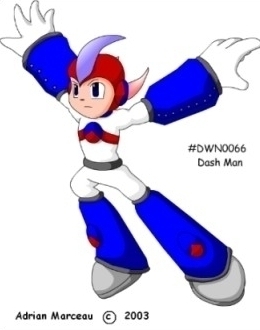 This piece of artwork is based on concept artwork for an original robot master I designed many years ago. This Dash Man character was one of my many early ideas for robot masters that would be featured in the [then] potential "MegaMan 9" video game.

Since then, "MegaMan 9" has become a reality and not just a pipe-dream, being released by Capcom on Nintendo WiiWare, Playstation Network, and Xbox Live Arcade in late 2008. Dash Man isn't one of the characters in the game, of course, but that's okay.

In retrospect, the original design wasn't very good, and this being a simple trace-job does nothing to help that. The design is pretty uninspired and the pose isn't exactly interesting. Colour choices could have been better too, but overall this character seems to be a lost cause.