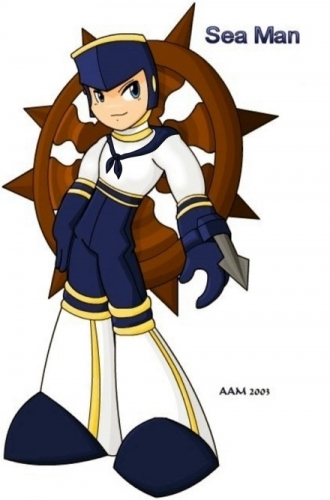 I spent quite a few hours redesigning this guy after his initial design because he didn't scream "Wave Man" like he was supposed to. I originally gave him an anchor instead of a harpoon but looking back the original Wave Man didn't have an anchor so I changed it. And then Capcom decided to release their own Wave Man EXE so that made my efforts useless and I finally just renamed him.

My last alteration of the WaveMan.exe attempt turned out to be this guy. This one has lost his anchors and his Navi emblem because I finally realised that it, in no way, followed NetNavi design standards.

It did, however, follow Classic Robot master design concepts, so I decided to alter it to be a Robot Master. As for the name, who could resist calling a Robot Master Sea Man? I mean come on!