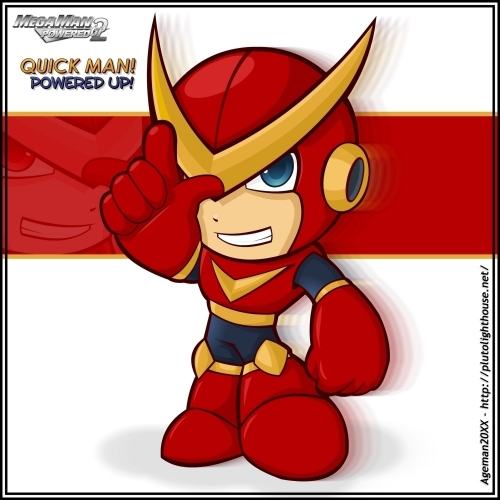 I really like the artwork style for the MegaMan Powered Up game so I decided to remake a beloved Robot Master from MegaMan 2 in the same style - QuickMan.

This was by suggestion of someone on the MegaMan Network Forums.

This version of QuickMan ended up coming out a bit awkward, actually, and I plan on redoing him a bit better in the future. There is another version in this gallery which I did a few months later, but the style isn't the same.

Overall, this one is good, just not great.

2009/02/02 : I've decided to start refining some of my older Powered Ups - giving them backgrounds, adjusting shading/colour, redoing certain lineart, etc. QuickMan probably needed it the most out of the lot of 'em. I modified the shading a bit, changed his eyes and face completely but there's still something wrong with his design. I just can't get QuickMan! D:

2009/04/11 : Using the background-changes of the other pieces as incentive, I decided to give QuickMan a bit more refinement. I've updated his eyes and facial expression again as well as his head shape, a bunch of linework, and some extra shading. Slap the new retro-background on and QuickMan Powered Up finally looks decent. I think I might actually like this one now. Yay!