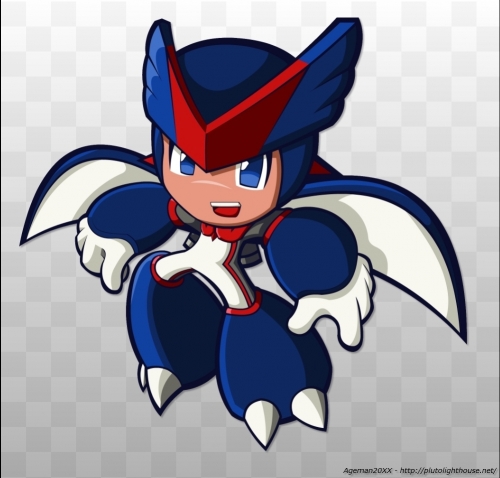 Again, continuing with the Trading Card Game artwork, I decided to do something new...kind of.

You see, the MegaMan Battle Network franchise is loosely based off the original Mega Man games but only in the sense that it uses the same boss names and slightly modifies their designs to look more like Navis (the series' term for the bosses and other computerized characters).

I did the opposite. I took a boss that was made exclusively for the MegaMan Battle Network series and converted to a MegaMan Powered Up robot!

Now, trying to be as modest as I can I have to say this picture/design totally rocks. I captured what made LarkMan.EXE (the Navi) cool and converted it to what a Robot Master would look like (in super cute form)!

The pose is fairly standard, so that could have been worked on - but the design, the lineart, and the colours are awesome. I can't find too much wrong with it and I'm very proud of it. He's right up there next to Wood Man. :D