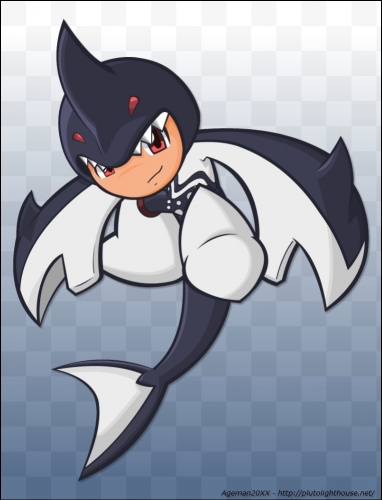 Still working on the MegaMan Powered Up TCG, I now needed an Aqua-type robot. I decided to do "SkarkMan" and my design idea was kind of interesting.

You see, there was a MegaMan game a wile back called "MegaMan PC" and while licensed by Capcom, it wasn't made by them (and you could totally tell). There was a robot named SharkMan in it that looks like SnakeMan but with a shark-like helmet instead.

Then, when MegaMan Battle Network came out, they decided to make a Net Navi based off the unofficial SharkMan robot..which looked more like a shark than a person/robot.

For my deisgn of SharkMan Powered Up (a robot that didn't officially exist) I decided to combine both elements to form a new design.

Overall, I think he's totally adorable and I really like him a lot. It could have something to do with the fact that he looks very similar to a Lugia from Pokemon, but I digress. Still a very cute robot.