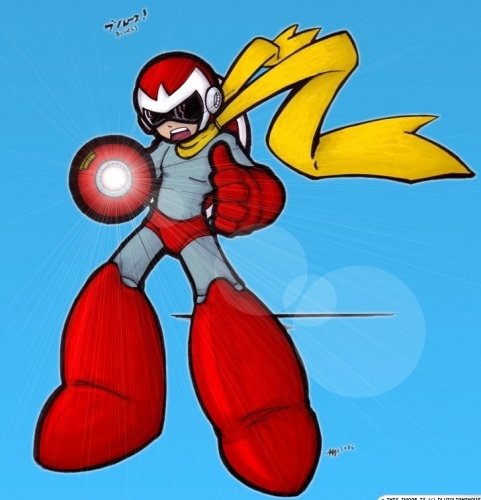 Okay, first because recently finding out that ProtoMan was a secret, playable character in MegaMan:Powered Up, I had an urge to draw him (I didn't really care to draw him in MMPU chibi style, but I wanted to draw him none-the-less). Second, I bought new inking markers that day and wanted to try them out!

I wanted to practice shading with my Prisma Color markers. So, I drew this up quickly and started on inking and shading it. I almost bought one of those sheets with all the circles on it for making perfect circles but it was too friggin expensive so I did not end up buying it and directly leading to the reason why the Buster has SUCH a thick line around it (I kept on screwing up the circle and having to make it bigger). Otherwise, however, I really like it!

This entry in my portfolio is the Paintshop-Pro CGed version of the art. I wanted to try something where I used shading and tones already set by markers and then just used Paintshop to add colour (as opposed to doing the shading in Paintshop). I'd have to say it turned out extremely well and I very well may employ this method of CGing again.