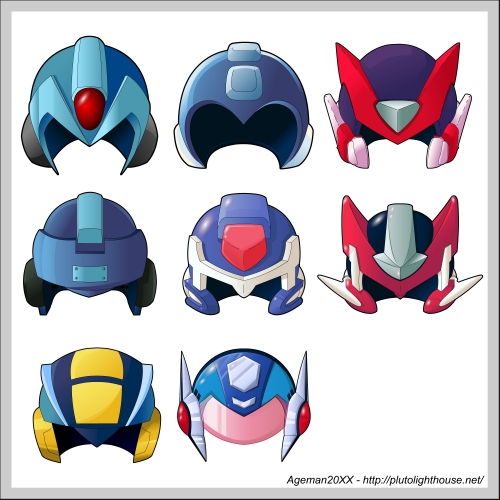 Last year when I was working for the MegaMan Network I was asked to make the banners for the site. They were pretty specific about the fact that they wanted the MegaMan Helmets from each generation on them and so I had to manually draw all the helmets from the various series that existed at the time.

These are them - Classic, X, Zero, Legends... You'll certainly wanna view the full image as the small one doesn't do it justice. Overall, I think even now they look pretty damn good.

What do you think?

2007/10/23 : After the release of three entirely new series, I was asked by The MegaMan Network to make a few new helmets for their banners. I've added two helmets to represent the MegaMan ZX series of game - Model X and Model Z - and I've also added a helmet for the MegaMan Battle Network and MegaMan Starforce series. I've updated the image with the four new helmets.