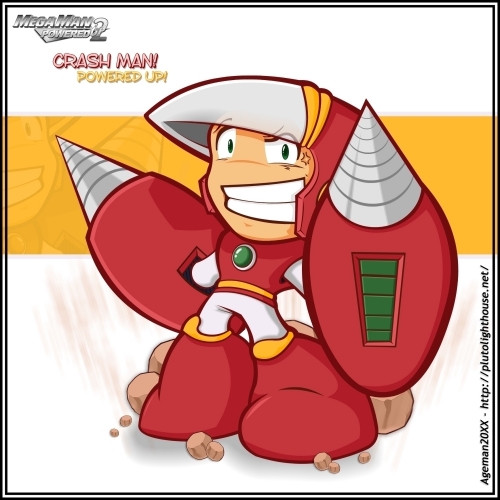 While the card game may not be in production anymore, I still love drawing Powered Up characters, and thus, I decided to CG this one.

CrashMan I actually found in my sketchbook from last year, it seems I did a few really awesome Powered Up robots but never CGed them. So here he is - my favorite of the doodles!

Don't you love how crazy he looks? And, and we can't forget how adorable.

The lines are tight and the colouring is crisp. What more could we ask?

2009/02/01 : I've decided to start refining some of my older Powered Ups - giving them backgrounds, adjusting shading/colour, redoing certain lineart, etc. CrashMan was obviously one of them. I changed some subtle details like the eyes and teeth, the pose, a few proportions and most noticeably the colour. I used the eyedropper to lift his colours directly from Capcom's official artwork but for some reason it look totally different in my image. While it's a very obvious red on the official CrashMan, it looks glaringly orange in this image. I'll have to look into this...

2009/04/11 : Following-suit with the rest of the Powered Ups I've decided to cut out the Gradient background. With this change comes more appropriate colours, a more obviously modified pose, better proportions, and a few added "effects". Oh, and the retro background that I used for the others. :) I think this one finally makes CrashMan tolerable - awesome even.