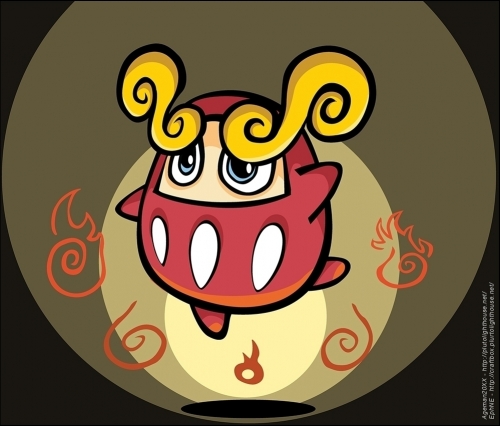 This image of the Pokémon "Darumakka" was made collaboratively by myself and my good friend Christine Brual prior to the release of Pokémon Black and White in Japan.  Our artwork was based only on a "leaked" and blurry screenshot.  We decided to each draw our interpretation of the leaked character and after several smaller doodles we finally stopped at the one you see here.

I decided to draw Daramakka in the style of Zelda  - and, more specifically, The Wind Waker line of games - because I was familiar with the style and thought that it would be a perfect fit for Darumakka's flames.  I made a point to exaggerate the eyebrows and eyes so they'd fit better but also to add a bit more personality and whimsy. :P After I finished the sketch and showed it to Christine, she took it from there - redrawing the lineart in Illustrator and adding the colour and background.

I think this piece turned out very well, and I think Christine did such a fantastic job bringing my simple doodle to life!  We should totally do more artwork together. :)