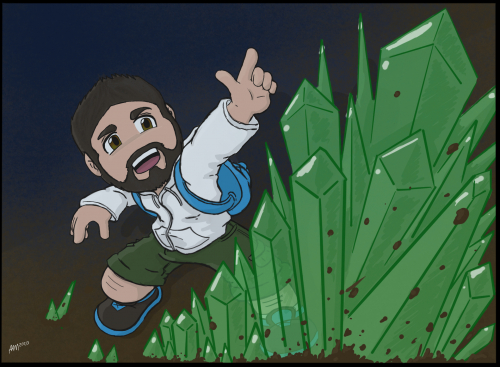 Five years ago I started drawing a picture of DJ in Procreate in a "dynamic" pose.  At first, he was pointing a gun but after deciding I couldn't draw guns I revised the picture to have him "bending" crystals like the Earth Benders in Avatar the Last Airbender.  The line-of-action was alright but I didn't like how his face was drawn and I was having a hard time with the proportions.  Not only that, but I wasn't enjoying how it felt drawing with a stylus on the iPad and eventually I closed the app and kind of forgot about the picture.

Fast-forward to today, a day after I got my new iPad Pro + Pencil, and I decided to take another stab at the picture.  I revised the face until it looked the was I wanted it to and I finished the rest of the body until I was happy with it.  It's not perfect (there are some issues with the perspective and the shading + pallet are pretty muted) but I'm still glad I finished the lineart and colouring.  In this version of the picture (there are two), he is bending the green crystals as originally intended.  I think they look pretty spiffy, but I wanted to see what it might look like with another element so I made the Water Bender version of the piece with a different overlay.