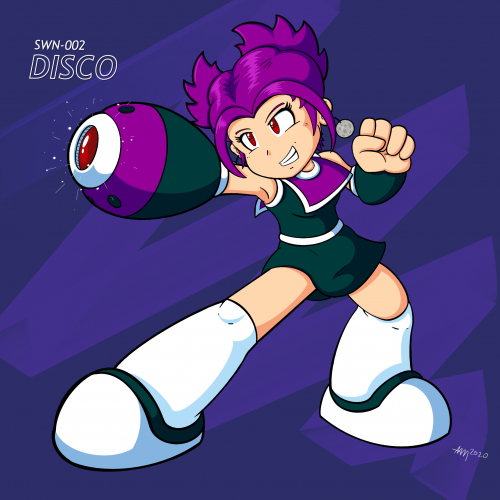 Disco (SWN-002) is an original character in the Mega Man RPG Prototype that acts as a sister robot to Bass, support for Dr. Wily, and a direct parallel / antagonist to Roll. Her design was originally conceived way back in 2003 when my idea of a Mega Man RPG was still just a pipe dream, but has since gone through numerous revisions and was eventually added to an actual game by 2011.

Even though I was the one who came up with Disco and made her original sprites for the game, I’m not the first one to create high-quality “official” artwork of her. An artist by the name of KarakatoDzo (commissioned by my friend RhythmBCA) was kind enough to draw an awesome picture of her back in 2016. That picture and the colours / revised design that they chose for Disco was the inspiration for this piece years later.

It took me quite a few attempts to get the lineart right on this piece, and once I did the colouring and shading were even more work than I anticipated - the whole thing took me almost a week to complete. To add insult to injury, once I finally shared the piece online, I was made aware of how her eyes were too far apart and once I saw it I couldn’t unsee it no matter how hard I tried. After a bit of tweaking and repositioning, I finally got her to a point I was proud of and could call “complete”. Overall I’m super happy with how the whole thing turned out and I’m so excited to finally post it on my website.