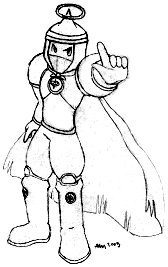 Back in the day - when I was trying my hand at creating Navis from already existing robot masters - this is the first and second design I came up with for a RingMan.exe

Although I personally liked the Arabian-themed one the best, the MegaMan BB thought the other looked better. Looking back, I don't find either version especially compelling but that was a while ago so I'll cut myself a little slack.

You'll find a CGed version of the concept on the left in this gallery as well (or, alternatively, by ). I can see plenty of things I could have done differently, but I do like the idea of using an Arabian-theme and maybe someday in the future I'll revisit this idea.

2010/11/20 : I've removed the second design concept from this image and moved it to the RingMan.exe Concept #2 page instead, opting to pair it with it's coloured version instead.