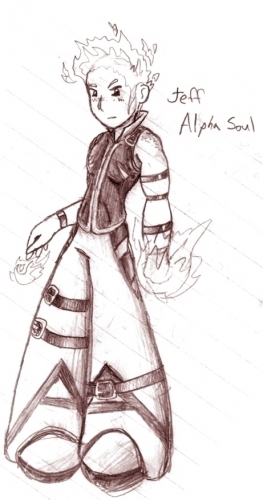 Jeff. Dear brother Jeff. In Chaos, this is my earthly brother Jeff, and he gains the Alpha Soul in the quest. There were many doodles of Jeff in this soul, and this was the first. It's rather hot for a doodle but doesn't show the final costume deisgn or Jeff's persona very well. Jeff's Chaos Relic, or weapon(s), are the Alpha Bracers. These allow Jeff to strengthen up his power immensely and concentrate fire power in the palms of his hands. Jeff is obviously of the fire element, and his character is known for his hot hot temper, mysterious appearances, and the fact that knowone really knows which side he's on.