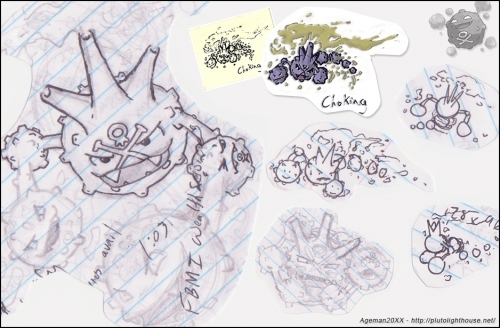 While talking about Pokémon with my co-workers, Koffing and his evolution Weezing came up in the conversation.  We joked about a theoretical evolution named "Choking" or "Hacking" and - being the fanboy I am - I simply had to draw it.  I decided to go with the name "Choking" instead of "Hacking" as hacking might imply a relation to data or computers and we couldn't have that!

As you can see from the image, there were a lot of revisions in design. I knew that I wanted it to have large hands and a trail of smoke, but it wasn't until the last few doodles that I thought to make it look like a locomotive and from there the design was easy. I know it isn't a terrible original design, but I think it turned out pretty well and would be fun to fight against in-game. :P