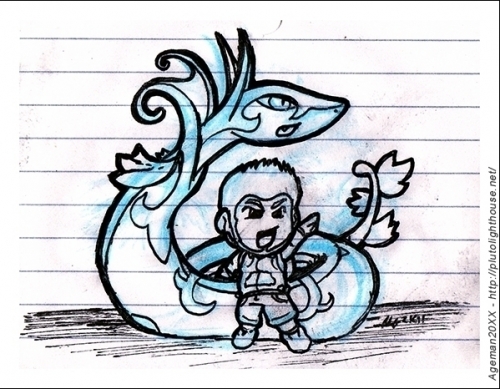 Even though I've beaten Pokemon White already and spent over 150 Hours playing the game, I didn't really have much time for drawing fanart - something I had traditionally done for each new generation of games as soon as they came out. I decided to remedy this (and hopefully start a trend) by drawing I quick doodle of my partner with the Pokémon Serperior.

Ender doesn't actually have Black or White and stopped playing Pokemon completely after Pearl Version, but I still like to imagine him as a trainer sometimes and if he were still I think he'd have picked the Grass-type Snivy as his starter due to his love of snakes and lizards.

The doodle is really simple and the lines aren't too tight, but I think it has the right flow I think and it's pretty adorable. I really like this one and might end up doing a fully coloured version at some point, maybe with a few more team members. :P