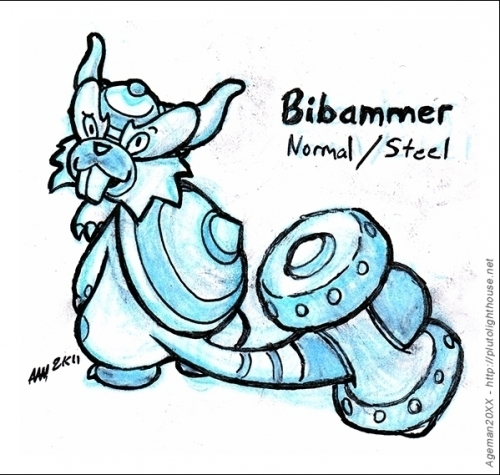 Bibammer is a theoretical, alternate evolution of the Pokémon Bidoof and was inspired by a post on Reddit about someone's Pokémon-related dream.  In it, they described a Steel type evolution for Bidoof with a shell and (later revealed) with a helmet.  I was intrigued by this concept and got the urge to draw it, so I did.

Bibammer's name is a play on its hammer-like tail and the name of its counterpart "Bibarrel".  Bibammer is a Normal / Steel type and attacks with mostly Normal-type moves like Slam, Double-Edge, and Body Slam, though he does have a few Steel type moves in his arsenal including Heavy Slam and Iron Tail.

Because I ended up doing this very late (or early?) at night, and because I wasdrawing in poor lightning, the image's linework isn't very tight and I'm sure some of the proportions are a bit off, but it is just a concept and I think it turned out kind of cute.  Looking back, the author of the post described it with the "face of a Bidoof" and a "jagged shell", so guess I failed a bit in the accuracy department, but I still had fun doing it and it wasn't supposed to be serious anyway. :P