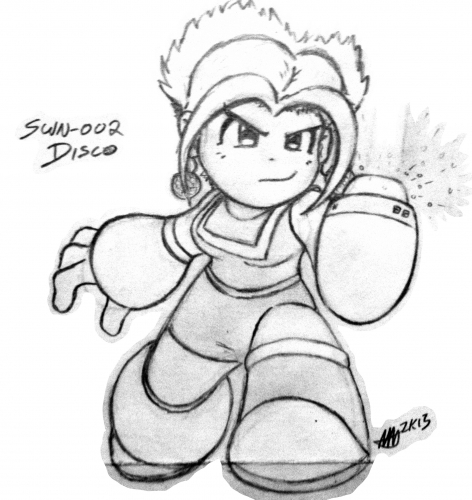 Disco is an original character that I designed and is currently being used in the Mega Man RPG Prototype.  Originally conceptualized for a theoretical “Mega Man 9" / "Mega Man RPG” fangame way back in 2003, it wasn't until recently that she made her way into an actual, playable build of something.

Disco is another Special Wily Number (SWN-002) after Bass, and acts as a sister robot to him and assistant to Dr. Wily. Dr. Wily created her as a response to Bass’ constant disobedience and the desire for a robot that would be more reliable and subservient for their master. Despite her programming, Disco is no pushover and has a strong and confident personality. She often talks down to Bass and his inability to best Mega Man, but holds a special grudge against Roll whom she sees as a personal rival. Disco is equipped with the Disco Buster - a solar-powered energy shot that heals the user while being charged but then lowers the target’s attack stat upon being hit.

The actual sketch itself isn’t great and could use a lot of work in terms of proportions, movement, and posing. The design of her boots could also use a bit of tweaking, but given that she only appears as a sprite at the moment it’s not a huge deal. Either way, I’m happy with the overall idea behind the design and I see great things in her future.