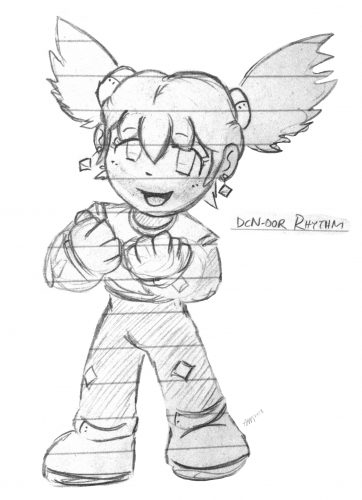 Rhythm is another original Mega Man character, this time created specifically for the Mega Man RPG Prototype. Rhythm’s design fills a very specific role in the story and in the game as opposed to Disco who’s was adapted from a previous idea from long before the MMRPG existed.

In the lore, Rhythm (DCN-00R) is a digital robotic entity created by Dr. Cossack for use as an assistant and debug tool in the titular “Prototype” computer system. Despite her small stature and youthful appearance, Rhythm is actually a very smart and adapt programmer that uses her abilities to “hack” the Prototype’s system to her benefit. Although not originally purposed for battle, Rhythm was able to adapt her own code and give herself the Rhythm Buster - a solar-powered energy shot that heals the user while being charged but then lowers the target’s speed stat upon being hit.

Although it’s not obvious from this black-and-white sketch, Rhythm’s appearance and colour-scheme are meant to evoke a callback to “Pallet” from the Mega Man X series. When Rhythm is side-by-side with Roll and Disco, the three share similar colour schemes, personalities, and roles as the three X-series navigators Alia (Roll), Layer (Disco), and Pallet (Rhythm).

This sketch isn’t anything to write home about and is obviously very rough, but I think I did a decent job in capturing her general design and the child-like wonder in her eyes. Her lower-half was clearly rusher  and may be revised in a future piece of artwork, but it was enough to to work from when creating her sprites for the game.