Before starting a new game, I took the opportunity to check my WiFi settings and download the Victini event via Mystery Gift. The process was fairly quick, and I was happy to be able to download the Liberty Ticket now rather than having to wait until later when it’s actually needed as I have a habit of forgetting things. The ticket saved to my cartridge and I selected the "New Game" option.

Professor Juniper – the new regional expert on Pokémon – introduced me to the world much like the many professors before her and then let me choose my gender and name. I'm happy to see the professor this time is female – it doesn't technically change the game in any way, but it’s nice to see that the games are becoming a bit more progressive and open minded with gender roles. Juniper is young and spunky compared to the previous professors, and I look forward to seeing what she adds to the story.

After the introductions were complete, the game faded to my room where a blue present sat on the table. With it, a note from Juniper asking only that we settle our decisions politely. As I head toward the present the nostalgia of the four previous generations wash over me – I’ve done this before and I remember this feeling. Once again, I’m presented with a choice that will shape the rest of my experience with this game. I was both excited and nervous – had my months of deliberation brought me to the right choice or am I making a mistake? Should I really choose the Fire type starter Tepig that I’d settled on weeks earlier? When faced with the decision I froze. Oshawott is was adorable so I wanted to choose him too, but looking Snivy and remembered that I’ve always chosen the Grass type starter before so maybe I should continue the tradition… I didn’t know what to do! And then, suddenly, I remembered the other decision I’d been dreading… the name!

I abruptly closed the DS and took a deep breath. It was just a game, so why was I taking it so seriously? “"Just pick something, and go with it! Stop OCD-ing over every little detail!"

I swallowed my anxiety and made a decision. I picked Tepig and, thankfully, the game did not ask me to nickname it yet. Instead, my in-game friends Cheren and Bianca challenge me to a Pokémon battle and in no time we’re in the heat of things. I immediately noticed how vibrant the game's sprites were on my Nintendo DSi XL and how – even though the sprites were a little blocky at times – they still managed to look fairly smooth in when motion. The way the camera pans around the battlefield now and occasionally zooms in on the Pokémon really make this game feel engaging and visually attractive than the others and I'm happy the series is finally moving away from static battle scenes. I quickly defeat both of my friends and as a result end up trashing my room. That's alright though, because once we head downstairs to tell mom she immediately offers to clean up in that typical motherly way. I may be a veteran to the series, but there are a lot of people who are not and I really liked how these intro battles played out and introduced the game's core mechanics. In a short time, I’d already been introduced to not only how battles and attacks worked but also how experience levels worked along with the increased stats associated with them, and all without any instruction. I think that’s good game design, and I appreciate it.

Our little party heads on over to Juniper's lab where she wastes no time giving us our new mission and sending us off on our journey. Like all games before, the goal this time is to fill the Pokédex by encountering and catching many different types of Pokémon. This task is a daunting one (with well over 600 Pokémon in total now) but at least she’s only talking about creatures native to the Unova region (for now) and that makes it a little more realistic. Juniper also takes this time to let me nickname my Tepig and though I hesitate for a second, I finally settle on the Final Fantasy theme and name my male Tepig after the headband-wearing, easy going Blitzball player from Final Fantasy X, Wakka. For a moment I’m uneasy with the decision, but once I let it wash over me I end up liking it and confirm my selection. Wakka is now an official part of my team, and I’m happy to have him. I will admit that I spent a few minutes just looking at Wakka‘s status screen entry and flipping his sprite over and over – I know it’s just a bunch of pixels, but there’s something almost magical about seeing your Pokémon jump around like that. I’m so happy these games are animated. :)

Our little group exits the lab and heads up Route 1 to watch Juniper show us how to catch a Pokémon. The demonstration is fairly straight-forward and repeats the steps we’ve all seen before – find wild Pokémon, weaken wild Pokémon, throw ball at wild Pokémon. Simple. The professor hands us a few balls and officially sends us on our way – from here we go where we want and do what we want. What more could a new Pokémon Trainer ask for? By this point I'd noticed how quickly events were going by. In previous games you didn’t get to actually choose your starter until much later, let alone have battles with your rivals, but in this game I’d already done that and was about to start the core part of my adventure – it was great.

With my back against the little town of Nuvema I ran toward the tall grass and started searching for potential additions to my team. This area has wild Lillipup (the Puppy Pokémon) and Patrat (the Scout Pokémon) both of which are Normal type and both of which are fairly plain. Don't get me wrong – Lillipup is adorable and I think Patrat could grow on me – but neither of them have anything unique to bring to the table. I know I shouldn’t hate on Normal type Pokemon (they have their uses) but this early in the game it’s all about type-matchups and Normal is the least useful in that department. I decided to catch one of each species for the sake of my Pokédex, but they were otherwise only good for experience points. I relentlessly slaughtered enough Patrat and Lillipup for my Wakka to learn a new move (Ember) and then I headed for the next city. 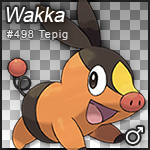 This entry was posted in Gaming and tagged diary, pokemon, white-version. Bookmark the permalink.